Exclusively this fall, Esperanza Spalding will present a jazz concert not to miss. She is joining forces with jazz greats and friends Leo Genovese, Dan Blake, and Francisco Mela to perform a selection of original compositions, very specifically selected for only The John Coltrane International Jazz and Blues Festival this year while Ms. Spalding tours her eclectic new show and album, “Emily’s D+ Evolution.”

Four time Grammy Award winner Esperanza Spalding has, in the past decade of her illustrious career (which also involves having performed at the Oscars, the Grammys, the Nobel Prize ceremony, and several times at the White House), continually and brilliantly married genres, pushed boundaries, and created groundbreaking work. By anyone’s measure, Spalding’s accomplishments at 31 years of age have already eclipsed those of artists half a century older, yet it’s blatantly obvious that her artistic journey is a lifelong one that we’ve just begun to collectively comprehend.

Spalding is, as a composer, bassist and vocalist, expansive, iterative, shape-shifting, open, and progressively innovative. A voracious and magnetic performer, she is attentively studious towards what the process of playing live–whether sharing a stage with her own revolving ensembles, Herbie Hancock, Stevie Wonder, Janelle Monae or Prince–presents to the structure of a song. That channeled energy runs through her recorded catalog of seven collaborative and five solo albums. The most recent, Emily’s D+Evolution, is out March 4th (Concord) and is a fresh artistic vision for Spalding–a daring tapestry of music, vibrant imagery, performance art and stage design. Co-produced by Spalding and Tony Visconti (David Bowie), the album is an electrifying take on the power trio, and is adorned with rich vocal arrangements and touches of synthesizer.

As the NY Times mentions in their 2012 post-Best New Artist Grammy profile, Spalding “has made her mark not just as a virtuoso jazz bassist or an effortlessly nimble singer but as an exotic hybrid of the two. The very nature of her talent is exceptional.” That same year’s release, Radio Music Society, debuted on the Billboard Top 10; The Guardian praised its “torchy swaggers.”  2010’s Chamber Music Society was infused with what NPR dubbed “an ineffable brightness”. Preceding that was her eponymous Esperanza album, performed in English, Spanish and Portuguese. Spalding’s 2006 debut, “JUNJO,” was called “a stunningly sophisticated yet playful set of acoustic trio jazz: rubbery bass, piano, drums and sexy Latin melodies harking back to the ‘70s Brazilian jazz of Flora Purim” by Rolling Stone–but 2006 is far from where Spalding’s life in music began.

Following an inspirational episode of Mister Rogers’ Neighborhood that featured Yo Yo Ma, Spalding pursued study of her first instrument, the violin, at a time when most children her age were just learning to read. At age five, she was playing with the Chamber Music Society of Oregon in her hometown of Portland. By the time she exited the group at 15 as a concertmaster, she was composing and playing acoustic bass professionally with local bands. The latter became the instrument most central to her work: she joined her first band as a bassist and vocalist, Noise for Pretend, the same year she left the Chamber Music Society of Oregon. Following the group’s run, Spalding became one of the youngest bassists at Portland State University. When that wasn’t ultimately a fit, she moved to and graduated from Berklee College of Music. Upon graduation at age 20, Spalding became the prestigious school’s youngest-ever instructor.

Through her groundbreaking albums, she is still teaching those who listen. 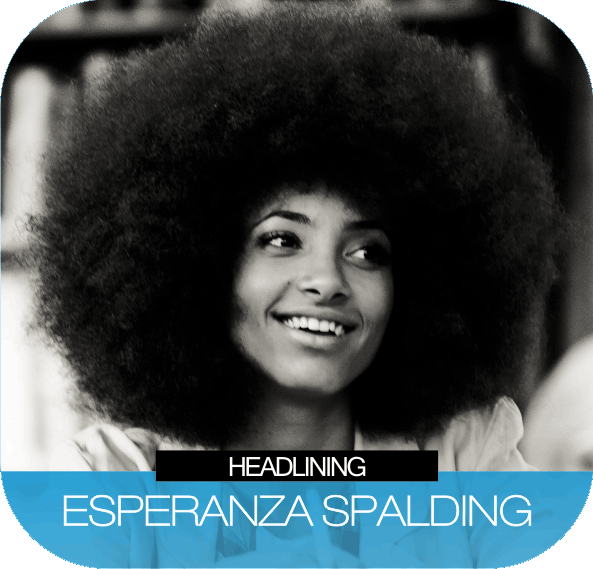