John Coltrane, the master of the saxophone, was born September 23, 1926, to John R. and Alice Blair Coltrane, in Hamlet, North Carolina, in the rural, red clay, farming region near the South Carolina state line. His grandfather was Reverend William Coltrane, a prominent African Methodist Episcopal Zion (AMEZ) minister in Hamlet. When John was an infant, his family moved 85 miles north to High Point, North Carolina, in the Piedmont, manufacturing part of state. His grandfather was Reverend John Blair, an elder in AMEZ church. Coltrane grew up on Underhill Street, performed in the high school band and graduated from William Penn High School in 1943.

John, whose father operated a tailor shop and played the violin, started playing the saxophone in High Point. He began to show an interest in music and the saxophone at an early age, way before he became a teenager. Coltrane was a member of a community band, in addition to the school band. In 1938-39, his grandfather and father died, within weeks of each other, causing the shy-acting John, who was around twelve-years-old, to become a little depressed. Four years later, days after graduating from high school, John Coltrane, like countless other blacks in the segregated South, went north. Coltrane joined his mother in Philadelphia.

It was during this period that the great saxophonist began to do what he would do religiously for the rest of his life. John Coltrane became an extremely dedicated musician who believed practice made perfect. He, according to several fellow artists, practiced on his instrument every day, all day.
“John Coltrane practiced more than anybody I knew,” said tenor saxophone legend Jimmy Heath, during an interview several years ago. Heath, whose award-winning autobiography, “I Walked With Giants” also mentioned Heath’s close relationship with fellow Philadelphian John Coltrane, was a friend and leader of a big band that Coltrane was a member of during the late 1940s. “He would practice after the gig. When we got back to the hotel. He would practice. Play all morning. Then he would fall asleep with the horn still around his neck. John was very, very disciplined and never thought there was such a thing as practicing too much.”

Larry Ridley, the bassist and educator, who was also a friend of John Coltrane and had sat in with him once in the 1960s at a New York City club, recalled a visit to Coltrane’s Long Island home, during an interview for the audio documentary “John Coltrane: A Great North Carolina Jazz Intellectual.” Ridley said that he and a group of musicians were sitting around John’s living room, talking and socializing, and when he looked around, he noticed that John had left the room. “Where is he’ Where is John’ Where did he go'” Ridley asked. Then, Larry said he heard John in the back room, practicing on his horn. “He loved to practice. He was a practice fanatic,” said Ridley.

So, it was in High Point, a small city known more for furniture making, where all the practicing and spirituality, all began. His grandfather’s joyful, uplifting church services and the supreme feeling he got from celebrating the spiritual side of life, all help to make, mold Coltrane into becoming a well-respected, widely-known, historic, influential, jazz giant. It was during those few years in his young life, during his time in High Point, when he was about to become a man, that Coltrane started his journey. It was one of the many turning points in his life, maybe the most important, because High Point was where the spark was lit, and it stands to reason that High Point is where the local citizens should celebrate one of their own and have a festival. After all, High Point was Coltrane’s home.

For years, there have been people in High Point who have known that the famous, internationally-known John Coltrane was raised in their hometown. Some noticed that for years, there have been a steady stream of tourists and researchers, visiting the house where Coltrane lived on Underhill Street The first effort to honor him as a former fellow High Point citizen began in 2004, when a group, called The Downtown Improvement Committee, formed and lead a successful effort to erect a statue of John Coltrane in downtown High Point. The impressive, bronze statue, created by sculptor Thomas Jay Warren, and financed by grants from The Downtown Improvement Committee, The High Point Convention and Visitors Bureau, The High Point Museum, The City of High Point, The Guilford County Board of Commissioners, The High Point Community Foundation and private donations, was dedicated September 20, 2006, at the Coltrane Plaza, in downtown High Point, with a reading sent from musician Carlos Santana.

“The Friends of John Coltrane was formed in 2009.” said Joe Williams, one of the organizers, and a member of the group. “We thought that we would use the momentum of the statue being erected and try to organize a music festival that would involve the High Point community. We wanted the whole community to be involved. It took a lot of hard work, but, we were finally able to present the first festival in 2011. It went well. A lot of people showed up from places like Boston, D.C., Atlanta, New York. We even had some folks from Japan contact us.”

Williams, a Philadelphian who moved to High Point years ago, said he has experience in show business as a promoter, record representative, and road manager. He was able to draw on his contacts and help book an all-star line-up for every festival since the first one.

“This festival is now a nationally recognized festival,” said Williams. “We have heard from people as far away as Canada, California, Massachusetts and New York. We think that it’s very important that High Point residents get involved. Last year was good, great crowd, and the best part about it was that most of the people there were from right here in the area. Everybody is always looking for somewhere to go for The Labor Day weekend. We think that this is the place.”

“This year, like last year (2017), we are offering two days,” said Williams. “We have been very fortunate because most of these fine musicians are eager and willing to perform at the festival basically because they love John Coltrane and his music. They understand what we are trying to do. We are also doing several things in the community, like helping to renovate his old residence, student essay contest, year-around events they help to keep John Coltrane’s legacy alive.” 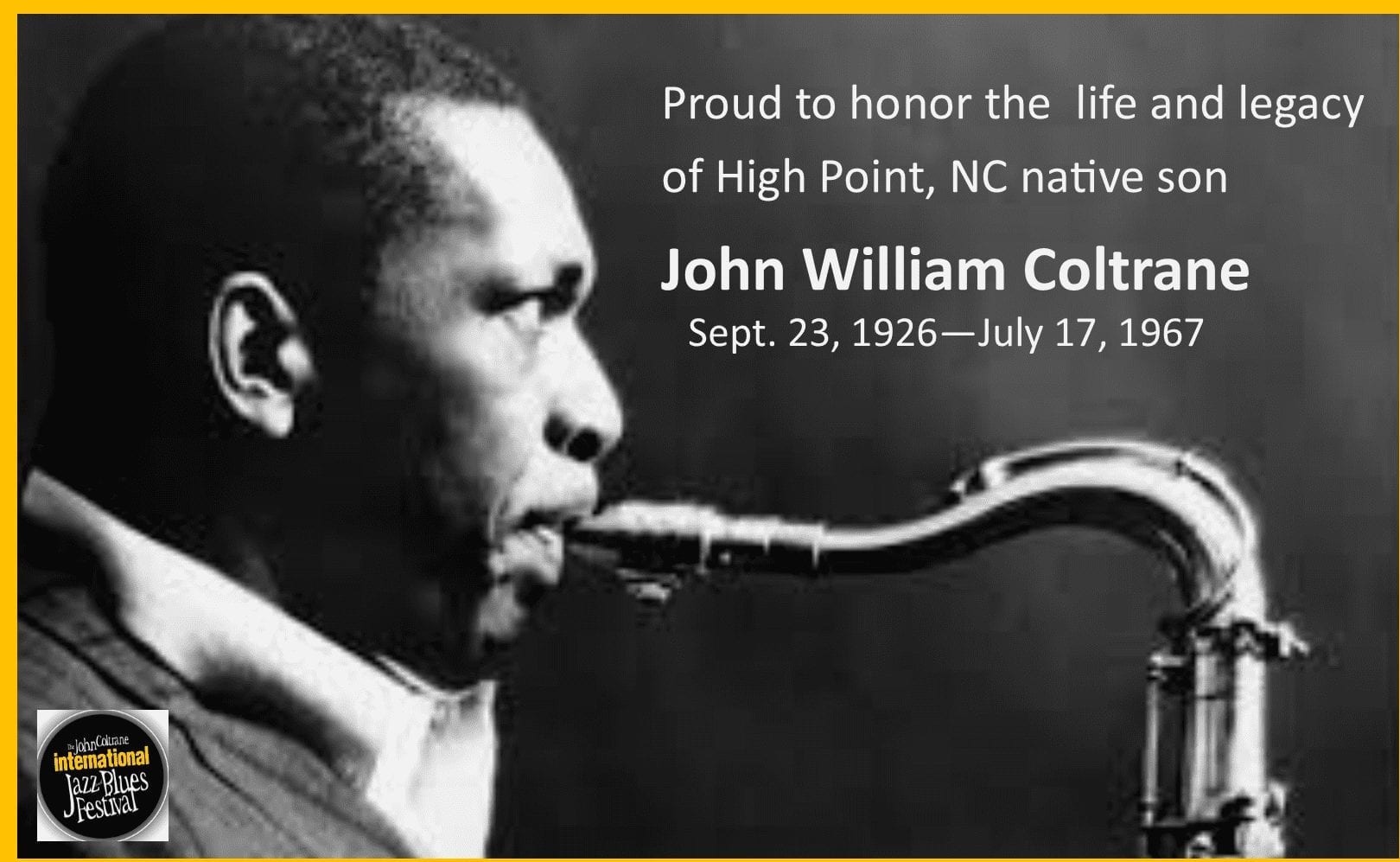