The John Coltrane International Jazz and Blues Festival is celebrated in High Point, NC because the iconic jazz musician and composer grew up here.  In fact, the idea for a music festival came after the group that came to be named the Friends of John Coltrane achieved the goal of erecting a statue in Coltrane’s honor. It was created by sculptor Thomas J. Warren who tried to capture Coltrane’s strong, contemplative character in this work.  The 8 ft. statue is one of the great things to see during the music festival down-time. It’s located at S. Hamilton Street and Commerce Avenue in the city’s flourishing downtown.  There’s also a commemorative statue on the campus of High Point University in recognition of Coltrane’s life and legacy.

The house where Coltrane spent his first 17 years still stands at 118 Underhill Street. After a visit to the bronze statue, take a drive by the Washington Street District which includes his home and the High Point Normal and Industrial Institute (since named William Penn), a local Quaker Founded institute for educating young African-Americans. Coltrane graduated from  William Penn High School. Music festival

Another treasure to see during the music festival that’s linked to the Coltrane musical legacy is at the High Point Museum.  The museum  houses a special Coltrane exhibit that includes the piano he played as a child and on which he composed songs while living in Philadelphia, PA in the early part of his career.  The piano belonged to his mother, Alice Coltrane and was a central part of their Underhill Street home.  The museum, with free admission,  will be open Friday and Saturday, 10 a.m.- 4:30 p.m. It is closed Sunday and Labor Day Monday after the music festival.

High Point is the furniture capital of the world, literally.  Twice each year 75,000 buyers, interior designers, architects, and others in the home furnishings industry from around the world spend almost two weeks exploring 11.5 million square feet of show space viewing the interior design trends for the upcoming season.  This market is closed during the music festival. However, the city offers a blanket of furniture stores and outlets throughout the entire city starting in downtown High Point, at the various stores on Main Street and Elm Street. Music Festival

The International Civil Rights Center and Museum is a must see if you have the time before the music festival.  Located in downtown Greensboro, NC, the museum celebrates the nonviolent protests of the 1960 Greensboro sit-ins that served as a catalyst in the civil rights movement.  During Coltrane Jazzfest music festival weekend, the Civil Rights Museum is open Friday and Saturday, 9 a.m.-6 p.m, with the last tour starting at 4:30 p.m.  It is closed Sunday and Labor Day Monday, like its counterpart in High Point. Music festival 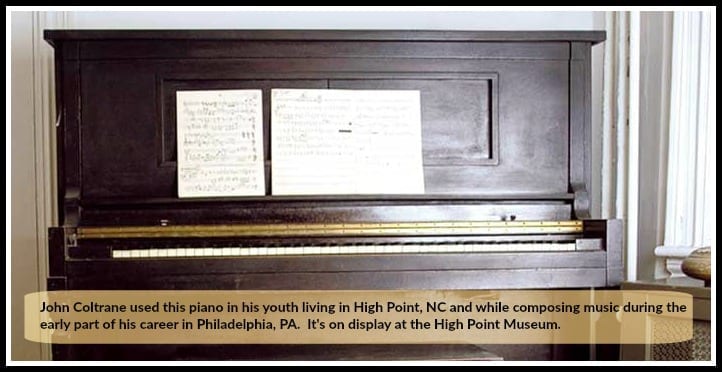