Touched and Touched By…

A music festival like the John Coltrane International Jazz and Blues Festival in High Point, NC often gets overlooked for the significant avenues of exposure to jazz history it provides. This year that significance increases exponentially with the scheduled appearances by Benny Golson and Pharoah Sanders. When when each musician walks onto the stage for their set, they bring with them the experience and memories of studying, practicing and performing with John Coltrane.  Most of us today can only listen to the recordings of the many legendary jazz artists that touched and were touched by these two prolific saxophonists.

Golson played with Coltrane in the early days of their burgeoning careers as young men in Philadelphia, PA.  Pharoah Sanders was a member of the Coltrane band when Trane focused his musical attention on exploring the realms of free jazz.   Both Golson and Sanders went on to occupy almost reverent positions within jazz history. Both musicians have been named Jazz Masters by the National Endowment for the Arts (NEA), Golson in 1996 and Sanders in 2006.

Benny  Golson has played in the bands of Benny Goodman, Dizzy Gillespie, Lionel Hampton, Earl Bostic and Art Blakey. He is the only living jazz artist to have written eight standards for jazz repertoire; among them “Killer Joe,” “Whisper Not,” “I Remember Clifford,” and “Along Came Betty.”  Golson has composed more than 300 songs including writing the musical scores for film, television and commercials over his five decade career. Honored with doctorates from William Paterson College, Wayne, NJ and Berklee School of Music, Boston, MA, Dr. Golson has conducted workshops and clinics throughout the U.S.

John Coltrane and Pharoah Sanders recorded at least 10 albums together with Sanders as a sideman in Coltrane’s band.  After John Coltrane’s death in 1967, Sanders worked briefly with his widow, Alice Coltrane before moving on to work primarily as a leader of his own ensembles.  He recorded a list of albums in the late 1960s for various labels including TAUHID and THEMBI,  the latter includes his signature “The Creator Has a Master Plan.”  In 1988 he won the Grammy Award for Best Jazz Instrumental, Group for BLUES FOR COLTRANE: A TRIBUTE TO JOHN COLTRANE, an album on which he collaborated with McCoy Tyner, the pianist from the classic Coltrane quartet. 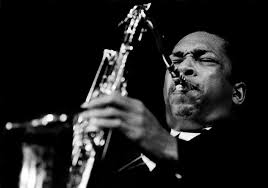