The new year 2020 will mark our 10th anniversary of bringing live jazz and blues performed by the world’s top musical artists. So, we take a moment to look back at the last festival through the words of Scott Homewood who attended on Sunday, Sept. 1st and wrote the review that follows.

For two idyllic late-summer days Oak Hollow Festival Park in High Point, NC was the setting for the 9th Annual John Coltrane International Jazz and Blues Festival!  And believe me, you couldn’t have picked a better setting with the wonderful open-air allowing the glorious melodies and harmonies to fly to the heavens unfettered and free. It was almost a spiritual happening.  A perfectly kept park, a beautiful lake, perfect weather with a clear blue sky dotted with puffy marshmallow clouds, warm sun during the day with cool breeze at dusk and a large crowd of people having fun and anticipating some great jazz.

While I was able to attend for only one day, numerous people who had attended the previous days’ event showered praise on Brian Culbertson, who some said put on an incredible show. Other notables included Lisa Fischer, who sings background vocals in the studio and on stage with The Rolling Stones and several other A-list acts, and who released one acclaimed solo album in the late ‘80’s. Some might recognize Fischer from her inclusion in the acclaimed documentary 20 Feet From Stardom, about background singers to the stars. Fischer was said to be in incredible voice and electrified the crowd with her vocal prowess.

Bluesman Eric Gales brought the crowd alive with an energetic set of blues and soulful R&B grooves, showing his guitar mastery and skill at connecting with an audience. For this being his third appearance at the festival, he seemed invigorated and his exuberance translated to the audience, who enjoyed his set immensely. Gales performed with a trio augmented by guitarist Mr. Sipp as a guest. It was a burner as Gales mugged, jumped and danced while playing blazing lead guitar for a full 80 minute set covering his entire career. It was a masterful performance from a seasoned vet who knows his audience and is willing to make the connection.

By far the highlight of the night was the performance of organist Joey DeFrancesco and his trio with special guest, the legendary saxophonist Pharoah Sanders.  Sanders’ appearance seemed fortuitous as he represented the main musical link to the festival’s namesake, having played on several of Coltrane’s albums in the 60’s such as Ascension, and on their dual-tenor recording Meditations. He then joined Coltrane’s final quintet, usually performing very lengthy, dissonant solos and later worked with Coltrane’s wife, Alice, on her early albums. Sanders has remained a powerful force in jazz, recording as a leader and playing as a sideman on many albums since, including guesting on DeFrancesco’s latest release In The Key of The Universe. As such, DeFrancesco focused on his latest release and played a more straight-ahead, seriously hard-bop set. than he did during his 2018 appearance at the Charlotte Jazz Fest. He seemed more playful and gregarious then, whereas the presence of Sanders seemed to add gravitas to both his mood and performance. Meanwhile, the crowd sat on the edge of their seats awaiting the jazz legend.  DeFrancesco began with two songs from his latest album that did not originally feature Sanders, but then Sanders was helped on onstage, and with the assistance of his cane, made his way to his seat right in front of DeFrancesco’s B-3. He looked every bit his age (79), but when he blew into his horn the years melted away and his tone was as pure and magical as ever. Sanders played two songs with the band before DeFrancesco called for Sanders’ classic The Creator Has A Master Plan done first on Sander’s album Karma and more recently on DeFrancesco’s newest album, hence the pairing.

Words cannot adequately describe the experience witnessing this performance. The band played for a while and Sanders took the horn away from his lips and started doing the chant done originally by Leon Thomas, then singing the songs title before returning to the chant and getting the whole crowd to chant with him. Jazz church at it’s finest. After a while, Sanders got up and started to leave the stage only to return and dance while people chanted at him. When the song ended, stagehands began removing the drums from the stage as if they knew nothing could follow that performance. DeFrancesco called for them to replace the drums and finished with another song while everyone recovered from what they had just seen. As someone from the stage said after the set, this was a moment that could never be duplicated and if you missed it, you missed one of the most amazing moments in jazz.

While Boney James is a jazz and R&B superstar in many ways and the ladies sure do love that smooth sax, after what had happened previously, James set seemed like it could be anticlimactic at least to this jazz fan. The crowd, however, ate him up  and after the emotionally-charged set from DeFrancesco and Sanders, James managed to get the crowd into his performance, no mean feat! 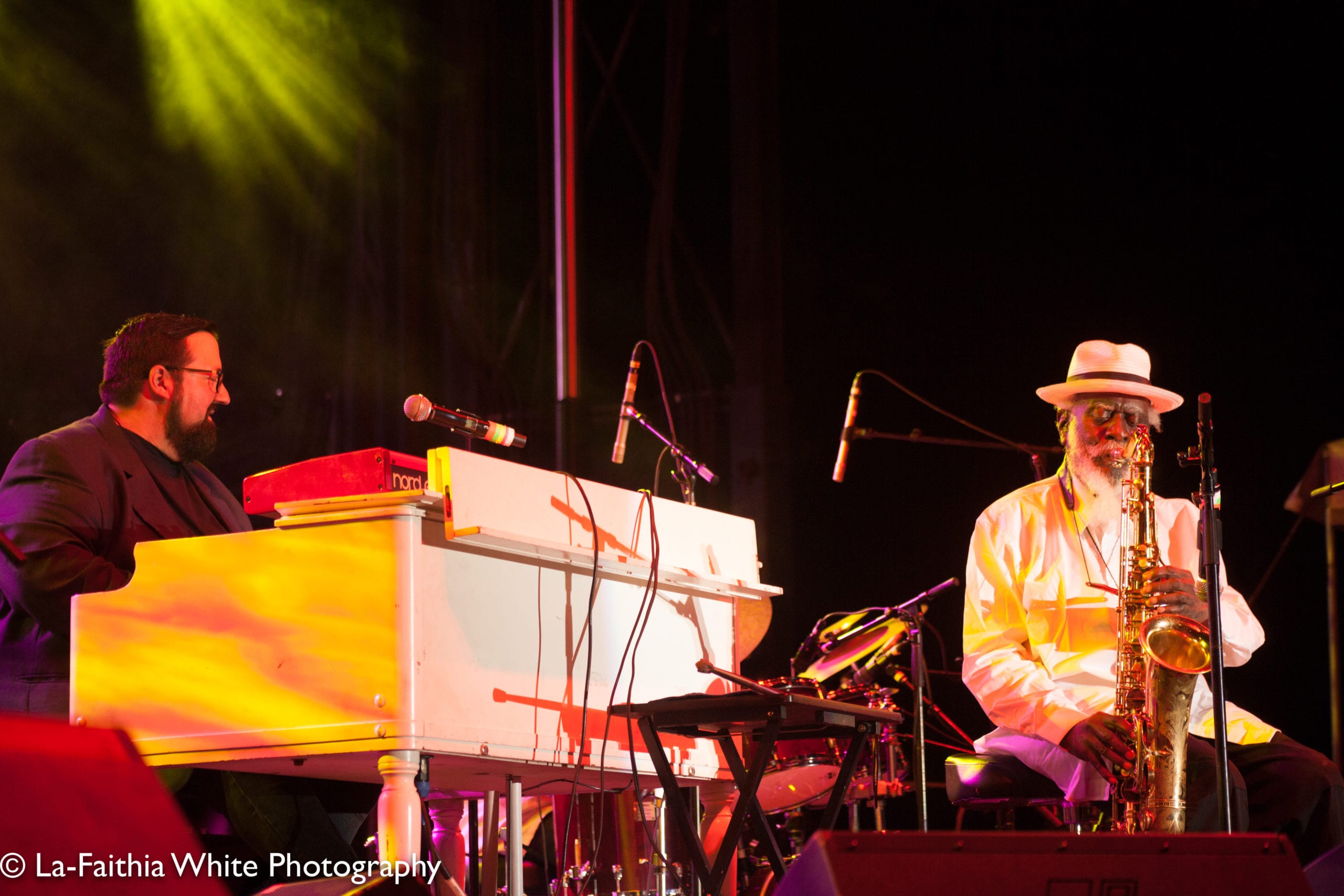