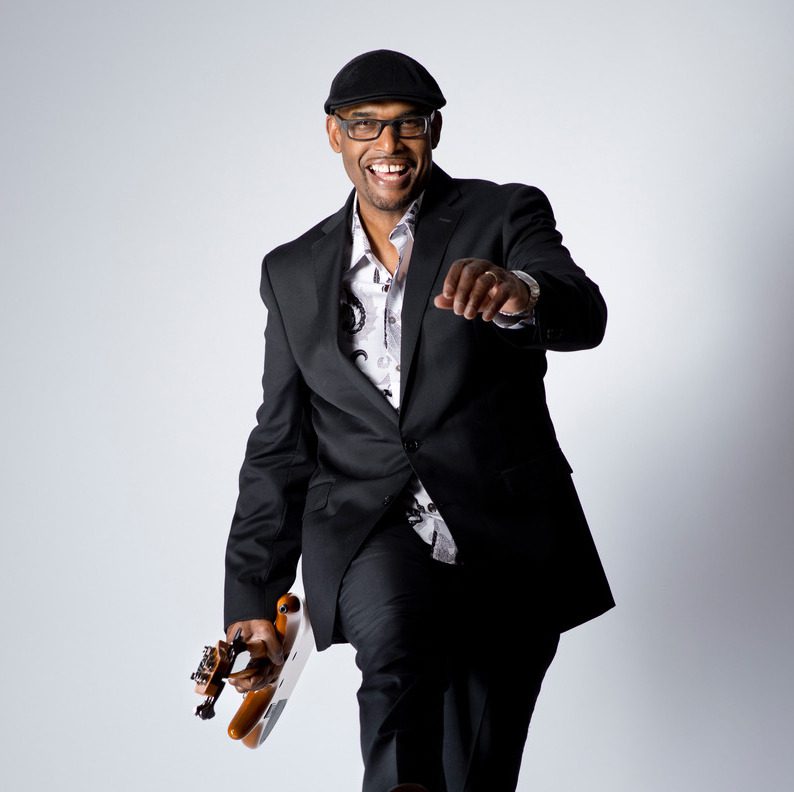 Surprisingly, Philadelphia born Gerald Veasley’s first musical influence was not the Philly sound. He was heavily influenced by gospel, blues and the soulful R&B recordings of the Stax Records roster of artists. The leading contemporary jazz bassist will perform with Marion Meadows, Alex Bugnon, Jessy J, Poogie Bell and Karyn White as part of the Masters of Smooth at the 11th John Coltrane International Jazz and Blues Festival (JCIJBF) on Saturday, Sept. 3, 2022.

Gospel music was a natural part of his upbringing since Ira Tucker, a member of the famed Dixie Hummingbirds, was his uncle. In addition to listening and playing on gospel records produced by his uncle, Veasley was drawn to contemporary gospel sounds of Andrae Crouch and the blues of Lightnin’ Hopkins. Then he found the jazz records in his house; albums like Miles Davis’ Kind of Blue, Wes Montgomery’s A Day in the Life, Ornette Coleman’s The Shape of Jazz to Come. Intrigued, Gerald Veasley was captivated by the familiarity he felt submerged in the music.

Although Gerald Veasley majored in political science at the University of Pennsylvania, he followed a music path instead. He started playing professionally in the late 1970’s and evolved into a virtuoso of the six stringed bass. He was schooled by his mentors, legendary keyboardist Joe Zawinul (of Weather Report fame) and saxophone giant Grover Washington, Jr. Veasley recorded and toured with both for several years before stepping out on his own. He was a member of the Zawinul Syndicate for a time and Special EFX later in his career.

Known for his work in the contemporary/smooth jazz genre, he has embraced the art of blurring musical boundaries, respecting tradition while moving forward. Gerald Veasley has recorded 12 albums as a leader, including The Electric Mingus Project which reimagines the music of legendary bassist/composer Charles Mingus; “I Got Life,” a tribute to Nina Simone; and “Live at SOUTH,” a collection of funk-tinged jazz originals captured in concert. The 2008 release, Your Move reached No. 12 on the Billboard Top Contemporary Jazz Album chart. Gerald Veasley’s bass can be heard laying down the groove for a wide range of artists with whom he has collaborated, including Philip Bailey, Jaco Pastorius, Odeon Pope, Nnenna Freelon, and B.B. King. In live performance, Gerald Veasley also invites collaborations. He and his band backed a different contemporary jazz headliner

Gerald Veasley has dedicated his life to music; not only performing and recording but to educating and motivating other musicians. He has served on the faculty of Philadelphia’s University of the Arts and is co-founder and artistic director of Gerald Veasley’s Bass BootCamp. The annual event, which was set up in 2002, has informed and inspired hundreds of bass players of all levels and ages.